Notice that the verb form changes whenever the subject changes. These different verb forms are known as conjugations. They indicate the subject (I, you, he/she/it, we, you formal, and they) and tense (ie. present, past, or future). The conjugations of regular verbs (verbes réguliers m.) follow easy to predict patterns while irregular verbs (verbes irréguliers m.) don't. Être, the verb on this page, is one of the irregulars. Two other important irregular verbs are aller (to go) and pouvoir (can).

The infinitive (l'infinitif) is displayed at the top of each verb's conjugation table. Besides serving to identify a verb, it is employed whenever the tense or the person need not be indicated. This is the case when verbs are strung together. The first verb marks the tense and person. 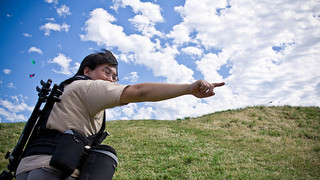 The infinitive is also used when a verb follows a preposition.

Il va aller là-bas.
He's going to go over there.

To negate something surround the verb with ne and pas.

Ne, like je, drops it's vowel when it comes before a vowel. This is called élision.

In casual speech, the ne is often dropped.

This introductory guide doesn't explore conjugations in depth, so every now and then we're going to send you to the conjugation guide. Now would be a good time to study the regular verbs which are divided into -er ending verbs, -ir ending verbs and -re ending verbs.